So November, huh? Look, I know it’s spring and not autumn here – my garden assures me of that, I can tell you! 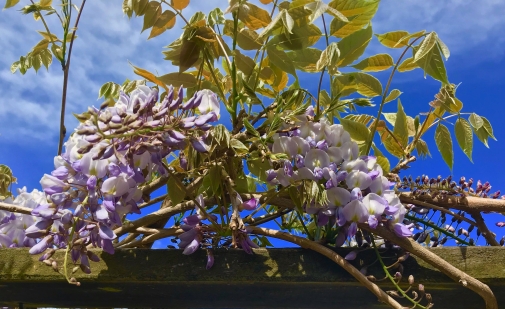 But… I can’t help it. November still puts me in mind of Thanksgiving, late autumn, and harvest festivals. 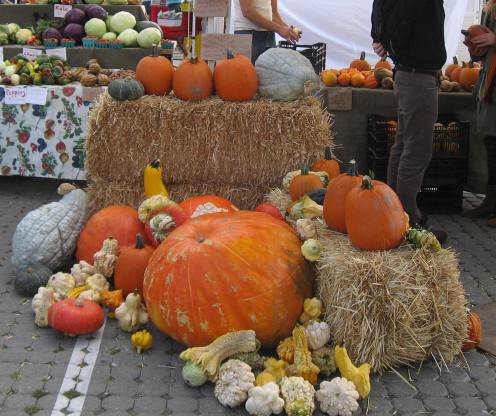 And because I’ve also been thinking a lot about pavlova here’s where I’ve ended up:

One of the things I lament about the switched seasons is that I don’t actually feel like eating the starchy pies and cakes I associate with a boreal Thanksgiving because it’s the wrong season for them. There’s a good reason pavlovas are on the table at many Kiwi holiday lunches – not only are they lighter eating, but they don’t make your house hotter by requiring your oven run on high for an hour. But I do still miss the flavors I associate with Turkey Day, so why can’t I marry the two together and start a new tradition?

May I present the Thanksgiving Pavlova

The first step was figuring out how to introduce some textural variation, because I am HUGELY textural when it comes to food. The multi-layer format of the Great Kiwi Bake Off’s pavlova showstopper challenge seemed like the perfect opportunity to play with the standard single layer+whipped cream+fruit format.

Taking a bit of inspiration from Stacey using hazelnuts in her showstopper, I thought about how to best incorporate the pecan pie flavour into a pav cake and arrived at pecan frangipane – just like traditional frangipane but made with bourbon and pecans instead of almond extract and almonds. 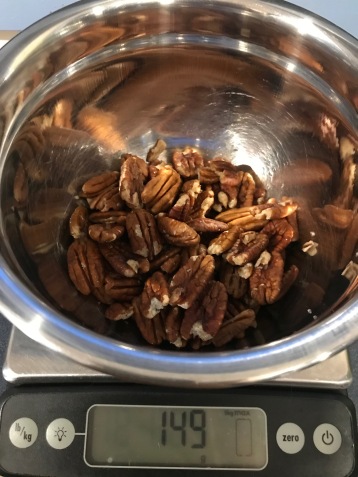 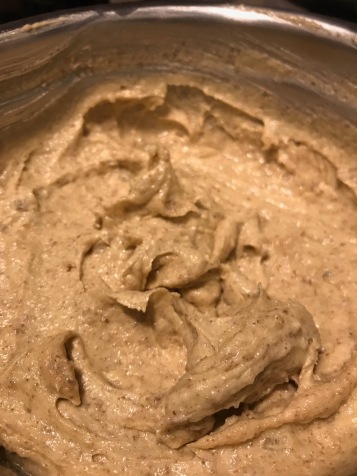 Baked in either two round tins a similar circumference to your pav rounds or in one thin layer and then cut into two rounds like giant cookies, they can be made a couple days ahead – in fact, it’s best to let the mix sit overnight before baking – and then kept in an airtight container until assembly. Keep the rounds thin, because if they’re too thick, it will compromise the structural integrity of the final product (and also make it difficult to cut).

Next was the curd component – pavlova definitely needs some acidity to counter all that sweetness and, at first, I thought maybe I’d try a pumpkin curd…but then I thought that was too far in the direction of the starchy desserts of autumn. Then I remembered a cranberry curd tart some of my U.S. friends have made for the holidays. I decided that would fit the bill perfectly except for one tiny niggle: no matter where I looked, I could not find frozen cranberries in my local stores.

So I tried a recipe I found for cranberry curd using cranberry “drink” (because I couldn’t find straight, unsweetened cranberry juice easily either…although I forgot to check my local health food store.)

To be fair, the curd actually came out tasting okay although it was kind of just… ambiguously tangy, like, tasty enough, but not specifically cranberry. And while the consistency was fine – actually perfect for layering – the colour was disappointing. 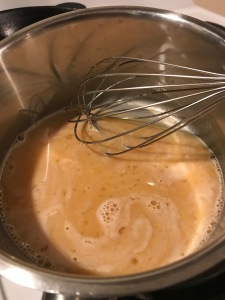 So I went out and bought a jar of cranberry sauce (WITH the bits) and stirred that in. The result was not visually pleasing – the curd got runnier and gloppier – but the flavour was much improved.

** I have since found a source for frozen cranberries, so if I decide to reprise this recipe when my family visits for Christmas, I will post an update, I promise!”

The beauty of the curd is that it, too, can be made completely ahead of time and stored for up to three days in the fridge before assembly.

For the actual meringue component, I initially set about just making my standard, vanilla flavoured meringues. 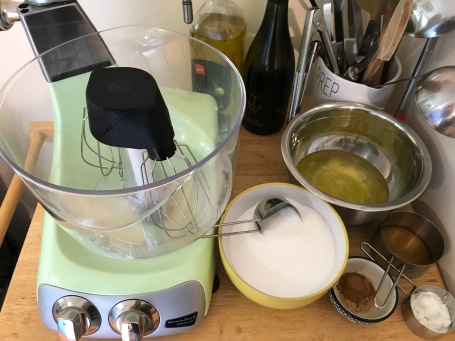 But at the last second, in a fit of genius, I decided to add the standard spices I would put in my pumpkin pie to the meringues themselves – because it’s just not Thanksgiving without pumpkin pie and if I’m not going to actually use the pumpkin, I can at least use the spices, right? Think Pumpkin Spice Meringue. 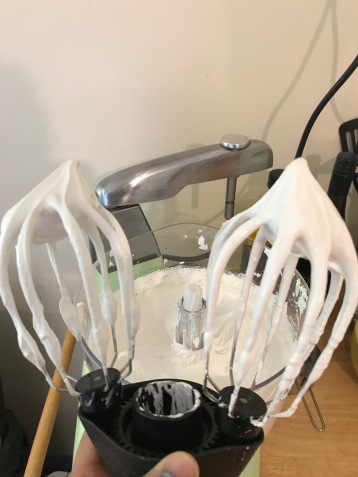 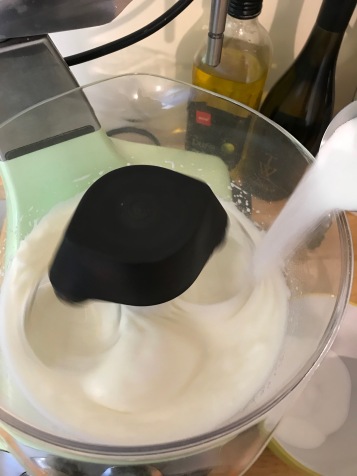 I made the discs of meringue thinner, hoping that would make them more structurally sound, and lo, there was only one tiny crack when I pulled them from the oven! Wowie! 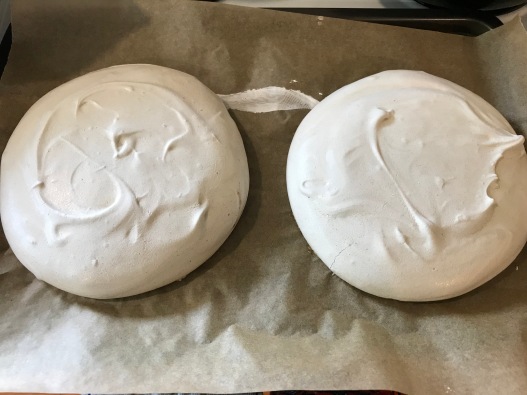 Once they had cooled completely, it was time for assembly. 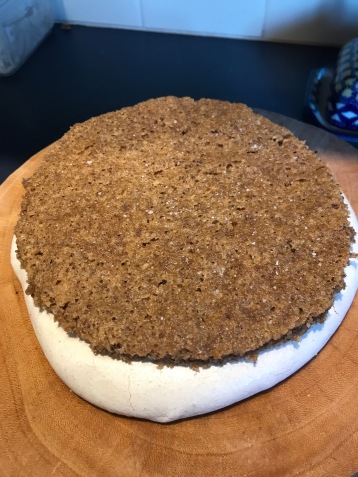 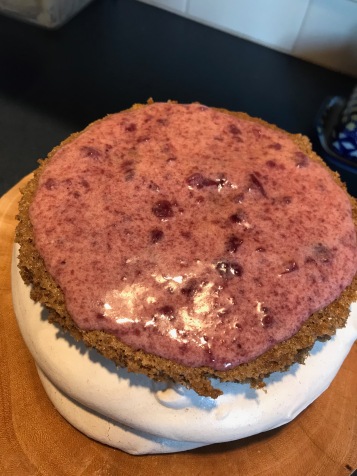 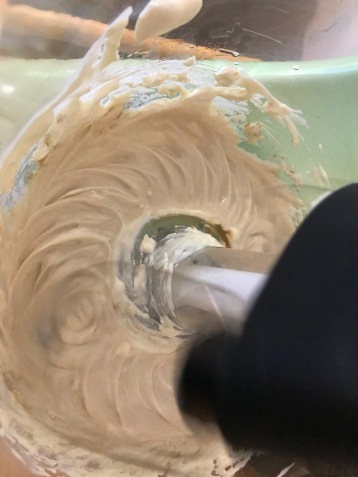 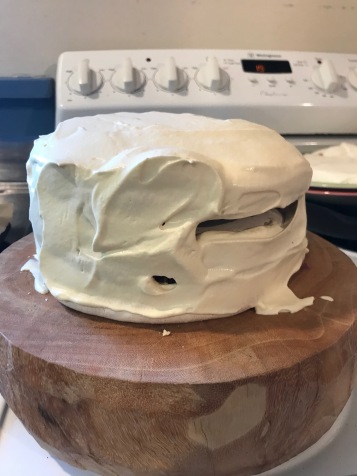 And I was right. Admittedly, if the curd had been a real cranberry curd or I had piping bags to hand, I think it would have looked a bit tidier but that can be for next time. 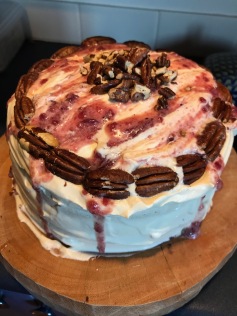 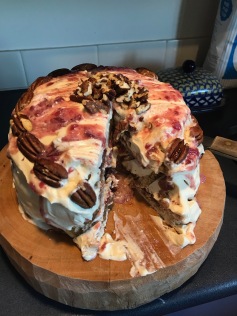 The verdict was astounding. While it certainly wasn’t a traditional pav, it still had the marshmallowy goodness inside, the cream outside, the tangy fruitiness of the curd, and an extra bite from the chewy frangipane. My Kiwi tasters loved it and my Yank tasters who tried it reckon it was a perfect marriage of Thanksgiving flavours and Kiwi tradition. It was completely devoured, which I guess is the one downside: no leftovers!

With Thanksgiving only a few weeks away, I wholeheartedly recommend you give this recipe a try!

To make the Frangipane:

Preheat the oven to 180C (350F). Toast the pecans in the oven until fragrant. Allow to cool complete, then pulverize in a food processor until finely ground, but stop before you make pecan butter. Set aside.

In the bowl of a mixer, cream together the butter and sugar until light and fluffy. Add the eggs and bourbon and mix well. Fold in the ground pecans and whole wheat flour and rest in the fridge overnight.

To bake, line a baking tray or two round tins with paper and spread the batter over. Bake at 180 (350) for 10-15 minutes – this will vary quite a bit based on how much is in the pans. As I used a baking tray, mine was quite thin and took about 12 minutes. You want the frangipane to be set, and a nice evenly golden colour, but not crispy or brittle.

When cool enough to handle, cut out your rounds (if you’re using a tray) and store in an airtight container until assembly (up to three days).

To make the Curd:

If you’re using frozen cranberries, combine the cranberries with the water in a small pot over high heat and allow to come to a boil. Reduce heat to medium and simmer until cranberries have popped and become quite soft. Using a stick blender, blend them in the pot into a compote, then pass through a sieve to remove the solids – you should be left with quite a thick, red liquid. Let it sit and cool to room temperature before adding it to a small pot and proceeding.

If you’re going the route I went, combine the cranberry drink and lemon juice in a pot.

To the cranberry liquid, add the sugar, eggs, yolks, more lemon juice and salt and whisk to combine. Place over medium heat and begin stirring. Stir the curd continuously, making sure to scrape into the corners of the pan – I like a plastic spatula for this. The mix will begin to thicken but continuing stirring until a thermometer reads 76C (or 170F). Remove the pan from the heat, add all the butter and continue stirring – off the heat – until all the butter is melted and incorporated. Pour the curd through the strainer again into a bowl. Cover the surface with wax paper or cling film (plastic wrap) and allow to cool and set. Once set, if necessary, stir through the canned cranberry sauce. This will keep for a week in the fridge in an airtight container.

To make the Cream:

Combine all the ingredients in a small bowl and whisk well until dissolved. Cover and put in the fridge overnight to chill.

When ready for use, whip to stiff peaks.

Preheat the oven to 110C (230F). Line a baking tray with baking paper – as you can see above, I like to trace circles on one side of the baking paper as a guide. I turn this side down on the baking tray but can still see the lines through the paper so my meringue discs are more likely to be the same size.

In the bowl of your standing mixer fitted with the whisk attachment, add the egg whites and begin mixing. Metal or glass is best for this, but I have plastic and haven’t had much problem getting the whites to whip.

Once you reach soft peak stage, add the sugar. Some people prefer to do this a bit at a time to make sure the sugar fully dissolves before adding more but I think this risks overwhipping the whites. I add the sugar all at once, but slowly and steadily. Continue whipping until you have glossy, thick, stiff peaks. Rub some of the mix between your fingers – you shouldn’t be able to feel grittiness from the sugar. Add the cornstarch, vinegar, and spice mix, mixing just enough to fully incorporate it.

Spoon the mix onto the baking trays. I smoothed down the tops of mine for this as they were going to be layered, but have done them in more of a plateau shape before. You could also pipe them out for pretty texture.

Bake in the 110C (230F) oven for approximately 1 ½ hours, until the outside is crisp and dry and lifts easily from the baking sheet. Turn off the oven and let sit for another hour.

Remove the tray from the oven and move the meringues to a wire rack to finish cooling.

Place one meringue disc on your serving plate. Add layer of frangipane and cover with curd. Add a second meringue, the second layer of frangipane, and another layer of curd. Cover all in whipped cream and decorate the top with leftover curd, leftover pecans, and dried cranberries.