The Great Kiwi Bake Off’s scone challenge this week has inspired me to deviate from my usual culinary history post in order to investigate a cross-cultural question that has plagued me for years: Is there actually a difference between scones and biscuits and, if so, what is it? 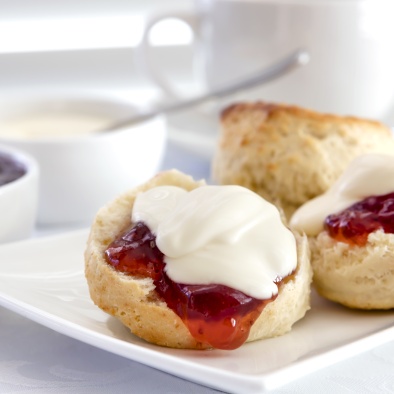 Single round ginger biscuit with crumbs and bite missing, isolated on white from above.

I can hear you wondering how I could possibly think the difference between these two needed any explaining, but I promise I’m not talking about comparing scones to crisp, crunchy cookies. For the duration of this post, when I write “biscuit”, I’m talking about a light, flaky, savory quickbread that is most often associated with the southern United States – although you can find them in all fifty (and probably Puerto Rico too).

The first person I can recall meeting who thought scones and biscuits were the same thing was a Kiwi. Not even when I lived in England did I ever encounter that opinion, but I also don’t recall encountering scones “out in public” a whole lot either. I’m not sure if that’s because I didn’t go to cafes much since I was a poor culinary student or because they’re more a home-baked good so not in your average café in London unless it caters to tourists looking to book an afternoon cream tea… Or maybe I just didn’t pay very good attention.

Now, however, in New Zealand, I see scones everywhere, in every café and whenever I find myself talking with a Kiwi about scones or debate the quality of the scones or discuss what we like with our scones, I hear some variation of, “oh but you call them biscuits, right?”

Nope. I call biscuits biscuits and scones scones and yes, they are different and I’m going to try and explain the difference without resorting to referencing some ethereal quality that one has and the other lacks. I should also explain: I will be focusing on the culinary differences between scones and biscuits. Because they are different, their respective cultural significances are different as well and are also deserving of discussion. But I’m going to save that for another day, or else this post would be 100 pages long.

And before we dive into the biscuit/scone discussion, there’s another distinction to make first: the difference between American Scones and Kiwi Scones. This distinction is important because everything I’ve read thus far on how biscuits and scones are different has been written by Americans, who are comparing biscuits to American scones, which aren’t the same as Kiwi scones.

For starters, Yanks tend to call them scones, pronounced to rhyme with thrones – which is how I pronounced it growing up too. Kiwis, on the other hand, tend to rhyme scone with gone…and now I do too, because I swear if you hear it often enough, eventually it just comes out your mouth without thinking about it.

And after reading this study showing the composition of the UK by pronunciation of s-c-o-n-e, it makes sense to me why New Zealanders rhyme the word with gone – early New Zealand saw a lot of Scottish settlers come over, particularly from the lowlands along England’s northern border. The map clearly shows that the stronghold of gone rhymers sits precisely in that same area of the U.K.

Meanwhile, over in the U.S., over 75% of people prefer to rhyme scone with throne. I would guess that percentage reflects a strong influence from the influx of Irish immigrants to the United States that started in the 1820s because, as the map indicates, the Republic of Ireland also shows a strong majority in favor of rhyming scone with throne.

Pronunciation issue aside, another difference between American and Kiwi scones is in the shaping. Many U.S.- based writers like to assert that one difference between biscuits and scones is that biscuits are dropped or cut in circles, while scones are cut into wedges or triangles. But I have yet to encounter a triangular or wedge-shaped scone here in New Zealand, although I have encountered square-ish shapes and recipes abound for drop scones (also sometimes called pikelets). So the shape distinction doesn’t hold water if you’re comparing Kiwi scones to biscuits.

As a rather interesting aside: in reading old scone recipes, I learned that the concept of cutting a wedge or piece from a larger mass actually goes back to the bannocks of Scotland that were then portioned into smaller pieces called scones. Nowadays, according to Florence Marian McNeill in her book The Scots Kitchen “[t]he names scone and bannock are applied rather loosely. In modern usage, the bannock is the large round scone, about the circumference of a meat-plate, which is baked on the girdle. When the bannock is cut into sections before being fired, or when the dough is cut into small rounds, you have scones.” So even she agrees – scones can be, and often are, round.

So what can be left for culinary comparison but composition? And even this presents problems with regard to which scone – or even biscuit – recipe you’re talking about. Writers in the U.S. often declare that scones contain sugar and egg, whereas biscuits do not. Well, first of all, I’ve found U.S. biscuit recipes, including from such venerable sources as The Joy of Cooking, that call for sugar. Second of all, while some scone recipes from New Zealand cookbooks do include either egg or sugar or both, a larger number of them call for neither. So I’m not satisfied that the difference between biscuits and Kiwi scones has anything to do with sugar and eggs, if they’re inclusion or exclusion can be optional.

So what, then, is the difference between a NZ scone and an American biscuit? All evidence leads me to the conclusion that the difference comes down to the ratio of the required ingredients and the technique employed for combining those ingredients.

In order to find a good baseline recipe for each, I collected several dozen scone recipes from New Zealand, and several dozen biscuit recipes from the United States and established a baseline set of ingredients. For biscuits, it was flour, liquid, fat, baking powder, baking soda, and salt. For scones, it was flour, liquid, fat, baking powder, and salt. Thus I considered these ingredients required. There were some recipes (for both biscuits and scones) that included sugar, eggs, and/or cream of tartar. While I know those ingredients can significantly change the texture and flavour of the finished product, they were outliers amongst the majority of recipes, which I felt made them optional ingredients. I excluded any recipes containing those optional ingredients from the calculations below.

Here’s how the ingredient averages broke down for each type of quick bread, based on 100 grams of flour:

Now, a couple caveats about these numbers: these calculations were based on the averages of the amount of each required ingredient. Additionally, the term “liquid” is used to collectively refer to buttermilk, milk, cream, and water. Similarly, “fat” refers collectively to butter, lard, or shortening. This is important because those items are actually composed of varying amounts of fat and water that have not been taken into account by the numbers in the chart. For example, shortening is 100% fat whereas butter is usually only about 85% (some European butters are more) – this means that butter will bring 15% more moisture and 15% less fat to the party, and that is not reflected in these numbers – 37 grams of butter and 37 grams of shortening were both regarded as 37 grams of fat for the purpose of these calculations.

Now, keeping all of that room for error in mind, what this very basic comparison shows is that, on average, scones have less leavening, less fat, less liquid, and less salt per 100g of flour than biscuits have got. These ratios, together with the way the quick bread dough is formed, is what determines whether the final product will be a scone or a biscuit.

Bringing it all together

Biscuit recipes often start with cutting or rubbing the fat into the dry ingredients. Then the liquid is added. Older biscuit recipes tend to emphasize a little kneading as the dough comes together. Newer recipes tend to promote a very gentle folding process, by which you pat or roll out the dough, fold it onto itself and pat or roll it out again. Either method, combined with the greater amount of fat and leavening, produces the light, flaky layers associated with biscuits. The fat produces more pockets of steam during baking and the kneading or folding stacks those pockets on top of each other, creating multiple layers. The fat also helps offset gluten developed by kneading the dough, as does the buttermilk (if it’s used, and it is traditional, though there are plenty of varieties that don’t use it). The acidity of the buttermilk also gives the leavening a boost, ensuring a nice rise.

Scone recipes also usually start with cutting or rubbing the fat into the dry ingredients, then adding the liquid. From there, though, the recipes exclusively encourage you to bring the dough together to form a craggy mass with as little handling as possible. The larger amount of flour, with less fat to work into it, is more susceptible to gluten if you work it too much, so that is likely why there is less liquid added on average as well. The result is still moist, but with a larger, more obvious crumb and no layers.

Flavour-wise, both biscuits and scones are usually quite savory or neutrally flavored on their own, but the crumb texture of the scone lends itself to additions, either sweet or savory as evidenced by this week’s GKBO episode – bacon, spring onions, cheese, root vegetables, spices, sundried tomatoes, spinach or rocket, dates, chocolate, citrus peel, berries, treacle… the possibilities are endless.

I have only very occasionally encountered flavoured biscuits – Red Lobster’s Cheddar Bay Biscuits spring to mind. Definitely not even close to the extent to which I see flavoured scones in New Zealand.

And then there is the matter of what you eat them with – scones usually call for butter (if savory) or cream and jam (if plain or sweet). I prefer my biscuits with butter and honey if I want something sweet, or split open with savory sausage-and-milk gravy (often referred to as sausage gravy or country gravy) over the top, and maybe a couple eggs over easy or sunny side up, if I want to make a meal out of it. I don’t think I would ever do this to scones… 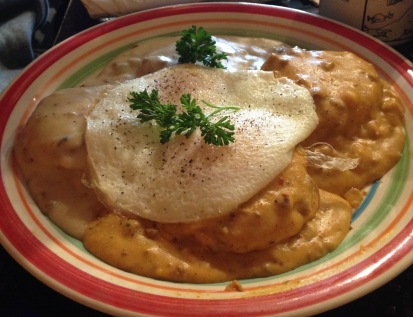 Biscuits and Gravy with Eggs Over Easy 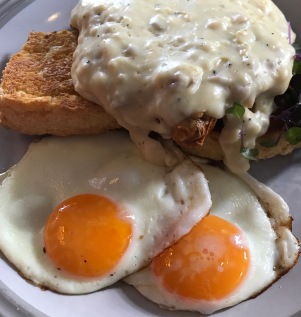 Biscuits and Gravy with Eggs Sunny Side Up

My friends from Appalachia in the U.S. swear by blackstrap molasses on warm biscuits but I can’t say I’m a fan.

So there you have it – that is the practical, culinary difference between scones in New Zealand and biscuits in America. Like all quick breads, they’re made of the same basic building blocks, but the ingredient ratios and methods of combining produce two differently textured products, each with their own, rich cultural heritage and each deserving of respect – and enjoyment – in their own right.

Next time: I attempt two Kiwi Scone recipes that are 100 years apart, plus American scones!